Missing your regular dose of TV quizzing now that University Challenge is done for the season?!  No need to mope – Fifteen to One’s back on, hoorah!

I love this show – so much so that I seem to make a habit of exposing my lack of general knowledge publicly by appearing on it every ten years or so.  So against better judgement I did it again for the third time – and these days you get to go on three shows in a row! 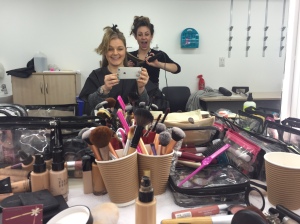 I think we need some more makeup

Contestants were sworn to secrecy about anything to do with the casting and recording until the show you’re on has aired. Well it has, and the gagging order’s been lifted!  After a whittling-down process involving pen and paper tests and onscreen auditions, eventually whoever was left standing was invited to the BBC studios in Glasgow in October last year – yes I know it’s a Channel 4 show, but that’s where it was.  Extremely lucky for me, as Glasgow’s practically my second home!  Presenter Sandi Toksvig was hilarious and made a point of having a little individual chat with everyone.  “So, Heikie, what’s your PhD in?”  Now we’d been briefed that if Sandi asks you something, give a bit of detail.  So I droned on about my PhD until she could take no more – needless to say, that bit never made it onto the show.  But I’ll never forget the moment when Sandi put an end to my monologue with a desperate “that’s really interesting” and turned to the next person: “So, Vicky, I hear you breed bunny rabbits?”

If you really must, you can watch me on catchup for the next few weeks (13/14/15th April episodes). 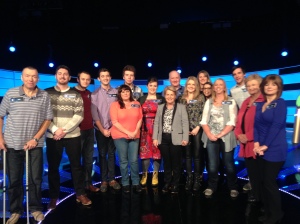 The Glasgow Fifteen, with Sandi

5 thoughts on “When Sandi Toksvig asked me about my PhD”