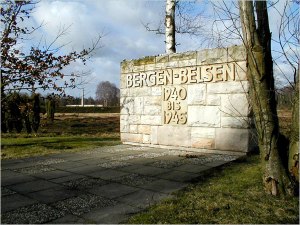 If you happen to be researching UK discourses around Germany, Queen Elizabeth I’s current visit to the land of her and Prince Philip’s ancestors means rich pickings indeed. Tomorrow the royal couple will visit the memorial site of the former concentration camp Bergen-Belsen. Before liberation by the British in April 1945, more than 50 000 people from all over Europe were killed here. The British monarch’s first-ever visit to such a site will be “personal and reflective in tone”, Buckingham Palace tells us. Now I know the Queen’s schedule must be highly managed and pre-planned to the ‘nth degree, but announcing the tone of your response to a former concentration camp long before you ever get there seems a step too far. Or is it? What is the correct response? Maybe, when faced with the prospect of an experience so outside the realm we like to call normal, we feel we need to have a pre-planned reaction up our sleeves, just in case?

It got me thinking about ways of dealing with the traumatic past, and the memorial sites I’d visited: several former concentration camps in Germany and Poland, as well as, more recently, sites in Cambodia and Vietnam. Apart from the obvious and widely publicised images, the strangest things stick in my memory. The ordinary buses around Weimar, displaying the name Buchenwald as if it was just another bus stop. Endhaltstelle indeed. In Poland, another bus and matching stop sign, looking eerily familiar yet out of place, shuttling visitors between Auschwitz 1 and Birkenau: it is run by a German public transport operator. The row of neat and tidy detached family houses, surrounded by wooden crisscross fencing, the epitome of German Kleinbürgertum, with a premium view of the former concentration camp Sachsenhausen. When were those houses built? Who lives there? The mind boggles. I’ve organised many school trips in my time as a teacher, but the single one which I shall never ever forget was with a mixed group of German and British teenagers to Auschwitz. Afterwards the students worked through this experience using drama and poetry, culminating in an exceptionally profound assembly performance. As often, art comes to our rescue and allows us to somehow express the inexpressible. 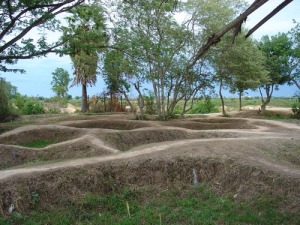 Another continent, another genocide. Cambodia is still bristling with the trauma of the Khmer Rouge under Pol Pot 1975-79, when over 20% of the population died. Over 20%. That means every single person alive today is affected in some way or other. The rugged earth of the killing fields at Choeung Ek conceals as well as displays remains of the victims. “Try to be respectful and not step on the clothes and bones”, our guide, Heng, tells us. I try – it’s not easy. They’re everywhere. Heng points out a jawbone, complete with teeth. “When it rains, the big pieces come up”. It rains a lot in Cambodia. We make our way back accompanied by the abrupt sound of machine gun fire, which makes me flinch. It’s from a nearby shooting range, “another tourist attraction”, Heng explains. “Do you want to have a go?” No. No thank you.

Something that connects many of these atrocities across time and space is the violence. The rape, the torture, the unimaginable pain of seeing your loved ones killed before death finally comes. On to Tuol Sleng in Cambodia’s capital Phnom Phen, better known as Security Prison 21, or S21. This is no prison as you may know it. A former school, it was turned into a particular kind of hell built on the twin pillars of torture and death. Of the approximately 17000 people ‘imprisoned’ here, only twelve survived. Two of them are still alive, in fact, they’re right here, as you follow the arrows to the finishing point of the walking tour. This way to the survivors please. To the left, close to the exit, a silver-haired man sits behind a pile of commemorative books, including his own memoirs. He’s surrounded by a group of American tourists, shaking the hand of one of them. “I’m so pleased to meet you” says the tourist. A little further along, to the other side, is another man behind a similar-looking pile of books, including his own memoirs. No tourists for him. What’s wrong with him? Is it just the seating position or has the other one the edge? Are they good friends or bitter rivals? “They don’t get any money from the state” explains Heng. “So if you’d like to meet them and buy something from them, they would appreciate it. They will shake your hand”. Awkwardly, we slip out of S21. 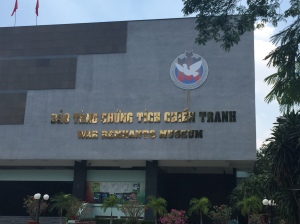 Last stop, the War Remnants Museum in Ho Chi Minh City, aka Saigon, capital of Vietnam. Housed in the former US Information Services building, it used to be called ‘War Crimes Museum’, hinting at issues of language and power. “Events are told from a Vietnamese perspective” the guidebook informs us. Not half. But at least they make no secret of it, unlike the much more dangerous Western habit of pretend-objectivity. Many horrors of the Vietnam War are exhibited here, or as it’s known in Vietnam, the ‘American War’, or the ‘War against the Americans to save the Nation’. Perspective is everything.

How we deal with the past matters. Once the business of pure survival is done, we have to start dealing with the trauma. There’s no right or wrong way, but deal with it we must. Do something, write something, say something. Silence allows evil to fester. What would the Queen say if she met a Holocaust survivor at Bergen-Belsen tomorrow? I imagine she might shake their hand, and say, in a personal and reflective tone: “I’m so pleased to meet you”.

One thought on “The Queen in Germany and other traumas”